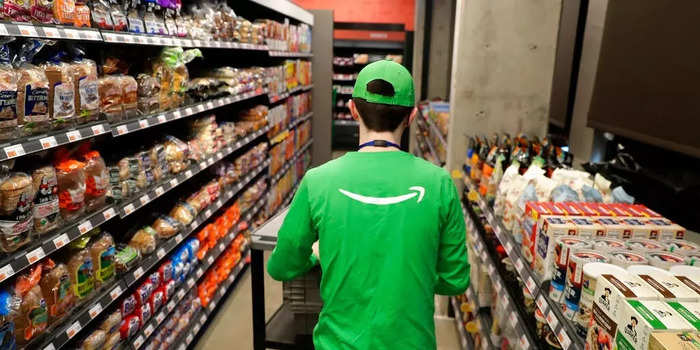 The e-commerce giant highlighted the growth of its AWS cloud offering and said it would raise Prime prices.

Amazon stock rose as much as 13% on Friday after the e-commerce giant reported mixed fourth-quarter earnings and guidance for the year ahead, though analysts focused on other key details.

The company said it would raise the price of its Prime membership for the first time since 2018, hiking the annual fee to $139 from $119. Additionally, gains from the company’s stake in electric truck maker Rivian led to an outsized earnings per share beat.

Here were the key numbers:

Revenue: $137.4 billion, versus analyst estimates of $137.6 billion
Earnings per share: $27.75, versus analyst estimates of $3.57
AWS Revenue: $17.8 billion, versus the $16.1 billion in prior quarterFor the first quarter of 2022, Amazon said it expects revenue growth of as much as 8% to $117 billion, which is slightly below consensus estimates of $120.6 billion. Expected operating income of as much as $6 billion in the first quarter of 2022 is also below analyst estimates of about $9 billion.Despite the mixed results and guidance, investors remain impressed by Amazon’s dominance in the cloud with its AWS platform, as well as its pricing power evidenced by its hike of Prime subscription prices. Here’s how three Wall Street analysts reacted to Amazon’s fourth-quarter earnings report. Goldman Sachs: “Climbing the wall of worry in e-commerce.” Goldman Sachs raised its price target to $4,200 from $4,100, and reiterated its “Buy” rating.”In the coming years, we see a mixture of Amazon’s prior period investments as an indicator that many investments toward next/same […]