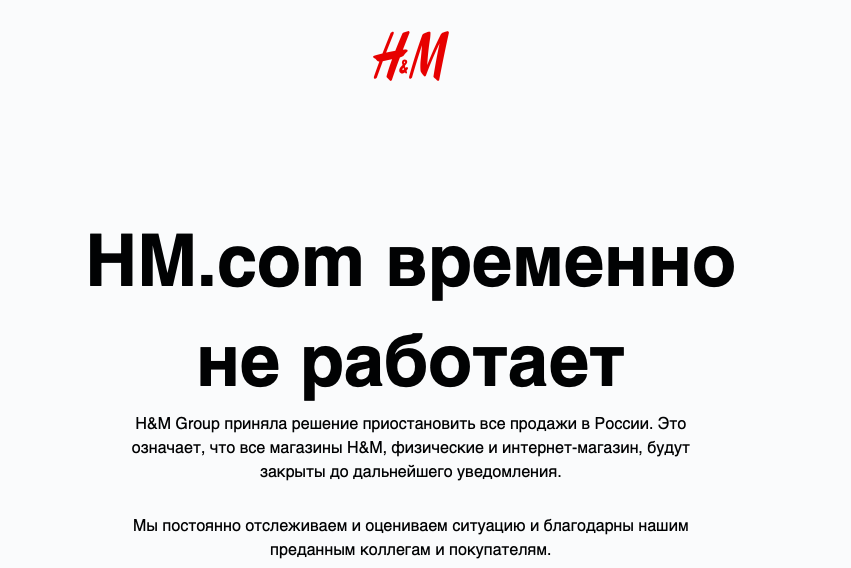 H&M informs online customers in Russia that it has suspended sales in the market. Screenshot of hm.com/ru Leading ecommerce and multichannel retailers and brands are putting sales to Russia on hold as the effects of the Russian invasion of Ukraine widen. Online delivery and store sales in Ukraine have already been interrupted by the war and now retailers including H&M and Asos have spoken out as they suspend sales to Russia.

Apple and Nike are among the other leading brands that are also reported to have stopped selling in Russia, while Google has limited the use of Google Pay by sanctioned banks. UK luxury retailer Burberry, meanwhile, has issued a statement to say it will support Ukraine relief efforts.

UK online retailer Asos said in a statement that sales to Russia are now suspended. It says: “Asos is providing an update on the impact of the Russian invasion of Ukraine on its business. Asos’ priority is the safety of its colleagues and partners in the region. Immediately following the invasion, Asos suspended sales in Ukraine as it became impossible to serve customers there.

“Against the backdrop of the continuing war, Asos decided to suspend sales to Russia earlier today. In FY21 Russia and Ukraine represented c.4% of Group revenue and contributed approximately £20m to group profit.”

Swedish retail group H&M has said in a statement: “H&M Group is deeply concerned about the tragic developments in Ukraine and stand with all the people who are suffering. H&M Group has decided to temporarily pause all sales in Russia. The stores in Ukraine have already been temporarily closed due to the safety of customers and colleagues.

“The situation is continuously monitored and evaluated. Representatives of the company are in dialogue with all relevant stakeholders. H&M Group cares for all colleagues and joins all those around the world […]